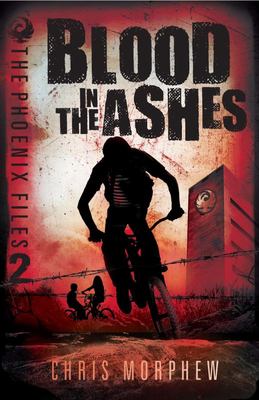 Things are getting bad in Phoenix. Luke's dad is trapped on the outside and cut off from all contact. Jordan is having frightening visions of things that haven't happened yet. And Peter is slowly losing his grip on reality--and his temper. But the worst is yet to come. All three are being tracked by an enemy who could paralyze them at any moment. And deep under Phoenix, they will uncover a secret that changes everything. The clock is still ticking. Published previously as two books, Mutation and Underground.

Chris Morphew was born in Sydney in 1985. His experiences as a qualified primary school teacher, combined with his own formative high school years, have resulted in unintentional invaluable research for his writing. Blood in the Ashes is the second of the three new volumes of his best-selling series The Phoenix Files. The first, Man in the Shadows was published in 2015. The trilogy's explosive finale Life in the Flames will be available in 2016. His current project sees him teaming up with another Zac Power contributor David Harding and bestselling Go Girl contributor Rowan McAuley, as Cerberus Jones, bringing us an exciting new sci-fi series for younger readers, The Gateway. Chris still lives in Sydney and continues to divide his time between writing and teaching.